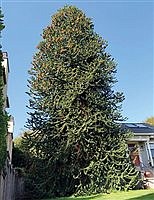 Like jellyfish and the Mona Lisa, there are beautiful things that are not to be touched. The same is true in the plant world.

Cacti and poison ivy come to mind. Then there is the fabled monkey puzzle tree (araucaria Araucana). Branch by spiky branch, it is hazardous to the touch.
Native to the coast of Chile, where it is the national tree, this unusual conifer was introduced into the horticulture of England in the 18th century. It caused a bit of a sensation.

Quite comfortable in the British climate, the tree became a favorite of great estate gardens and manor houses; ergo, mature trees dot the kingdom’s landscape today. Eventually, araucarias reach a height of 130 to 140 feet with a spread of 30 to 40 feet. An exquisite plant, it has the symmetry and stature to rival sequoias, albeit the tree grows into a noble dome at the top, not a soaring spire. Gardeners be warned: They need plenty of space.
The common name, monkey puzzle, comes from European horticulturists and is in reference to the conifer’s tough, sharp leaves. Wreaths of leaves tightly encircle each branch in dense rows that extend along the branch. The leaves are triangular, an inch-and-a-half long, an inch-and-a-quarter wide, the apex of which is a very sharp point. Grasp a branch and one might well be looking for antiseptic and Band-Aids.

Upon seeing this tree in an English garden, about 1850, it was reported that Benthamist Charles Austin commented, “It would puzzle a monkey to climb that,” and the common name was spawned.
Puzzling as the tree might be to any monkey, it was not so to lumbermen. The trees have great value as timber and, sadly, have been logged to near extinction in Patagonia. Fortunately, the Chilean and Argentine governments recognize this and have come to the rescue of the great forests that remain. A few trees, exceeding 1,000 years of age, are still growing.
There is a humanitarian side to this story. The legal protection of the tree, which began in 1971, was, in part, due to cultural preservation. Although these conifers are not pines, the edible seeds, carried in the cones, are commonly referred to as “pine nuts.” These seeds (or nuts) are gathered by the indigenous Mapuche people and ground into flour as a dietary staple. The nuts commonly measure 2 inches in length.

The harvesting-gathering system is something of a spectacle. A climber goes to the top of the tree dome with a large pole and knocks off the spiny, 10- to 15-pound mature cones. They fall to the ground and the seeds drop out of them. Awaiting gatherers pick them up, pushing a percentage of the most robust seeds back into the earth, where they will sprout and grow around the parent tree. Thirty to 40 years hence, the offspring will be producing seeds. Germination rates of this system have been tracked and boast a 90 percent success rate.
The Mapuche have helpers in their reforestation project. Long-haired grass mice collect and bury nuts for winter. Those going uneaten usually germinate and grow. Flocks of parakeets land atop the trees to pick the nuts. In their zeal to harvest these nutritious seeds, the birds often scatter them. These too, are slowly regenerating decimated forests.
This conifer is dioecious, meaning plants are either male or female, producing two different kinds of cones. Point being, it takes two trees of opposite sex to reproduce. A few plants produce both male and female cones.
Monkey puzzle trees take to our Pacific Northwest climate and landscape like many of the other immigrants to our great horticultural melting pot.

To reiterate, they require ample space. So, they are not suitable for many gardens. Still, if you have room, this is a spectacular specimen to grow. Surprisingly, sources for seedling monkey puzzle trees abound, by both nursery and internet order. Plant trees between now and March. Water them thoroughly the first two or three summers. Be certain the site has good drainage. Nature pretty much does the rest. If you do need to prune a tree, dress for battle: heavy gloves, a heavy sweatshirt, long pants and sturdy shoes. The cultivation of this plant is akin to having a pet porcupine.

We have a beauty of a monkey puzzle tree in Madison Park. Stroll by the house on the southwest corner of McGilvra Boulevard and East Galer. Look up the slope at the south edge of the lot. ’Tis a sight to behold. This month you can even see a few cones toward the top of this tree.
Paleontologists tell us that the monkey puzzle tree has been around for about 140 million years. In that vast span of earthly history, araucaria Araucana has puzzled more than monkeys. Scientists think the thick, tough bark on the trunk of mature trees suggests that it evolved to survive forest fires. Then, there is a theory that the plants’ survival is due to its leaves. As delicious as they look, one bite would let any animal know this is not salad. Imagine a Jurassic era brontosaurus mother seeing her young’un stretch up its neck to nibble on the branches of a monkey puzzle tree.