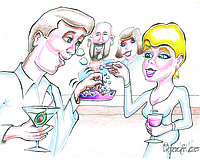 There was little chance of joining any social groups in the early ’40s since we traveled from one military base to another. Dad’s assignments were in Southern California, and often my classmates spoke only Spanish. According to Encyclopedia of the Great Plains, many were Okies escaping from the hard-hit “drought-ravaged corners of Kansas, Colorado, and New Mexico but especially the impoverished parts of Oklahoma (the origin of one fifth of Okies), Texas, Arkansas, and Missouri.” 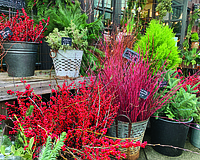 Get Growing: A winter holiday refresh for the garden, the easy way

I’m all about efficiency, which is a kinder way of saying I like to avoid extra work, from my hairstyle and clothes to the garden. I adore coming home to a colorful entryway filled with seasonal color but am less excited about overhauling thickly planted containers every four months.

Falling Awake: Looking back at the Italian festival

My good acquaintance Dennis invited me to sign copies of my books at our Italian Festal, and I was thrilled. The invitation gets better: “I can’t find another Italian author this year. People are still hesitant about crowds. You can have the table yourself.”

SEATTLE SOUNDINGS | A failure of imagination

As the antiquated Fun Forest at Seattle Center staggers through its final months of life, controversy has erupted over what to replace it with.

LEST WE FORGET | City should focus on real crime

Other parts of the city suffer while Belltown gets special attention

More than a month ago Mayor Mike McGinn announced a new public-safety initiative focused solely on Belltown. The mayor says it&rsquo;s a pro-nightlife effort, but others say it amounts to a private police force and favoritism for a single neighborhood, while the needs of other neighborhoods go unmet. Here&rsquo;s why.

Kelly Williams-Bolar simply wanted a choice for her children. She wanted them to have an education worthy of their potential, and so, she lied. In the eyes of the law, this case is cut-and-dry.

OUTSIDE CITY HALL | Beyond neighborhood planning: New strategies needed for a democratic voice

Seattle City Councilmember Richard Conlin talks about being socially and environmentally responsible, and responsive to neighborhoods...

THE BOTTOM LINE | 2.7-plus is a must for African-American students

We have started another school year, and though some kids are eager to be a part of the educational experience, others dread going back into an environment that is embarrassing and humiliating to them because they cannot read or write.&nbsp;

THE BOTTOM LINE | What would Martin Luther King Jr. do?

Most of the problems that we face as human beings are difficult to figure out because we cannot all agree on a formula that would satisfy more than one side. But what if you had a situation where the formula was simple and it would be easy to get agreement on how to use it?

OUTSIDE CITY HALL | Park districts not solution to ailing system

Everyone agrees Seattle&rsquo;s parks system is in dire financial straits, with more than $270 million in &ldquo;deferred&rdquo; maintenance.

In the late 1950s, a group of us who grew up in Madison Park fulfilled our duty for Uncle Sam.