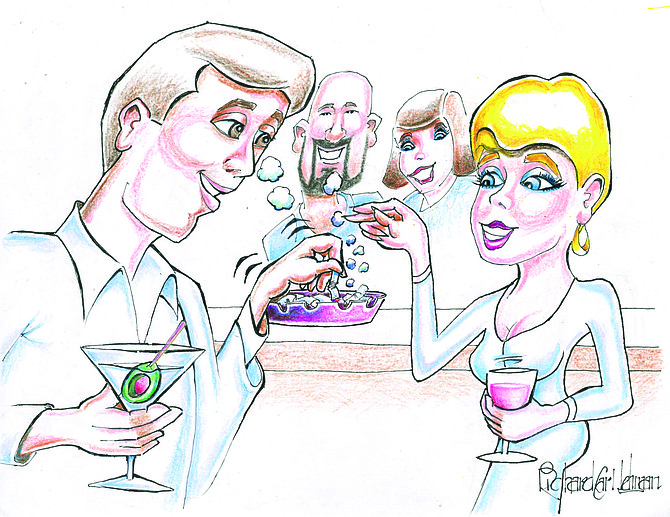 There was little chance of joining any social groups in the early ’40s since we traveled from one military base to another. Dad’s assignments were in Southern California, and often my classmates spoke only Spanish. According to Encyclopedia of the Great Plains, many were Okies escaping from the hard-hit “drought-ravaged corners of Kansas, Colorado, and New Mexico but especially the impoverished parts of Oklahoma (the origin of one fifth of Okies), Texas, Arkansas, and Missouri.”

All that changed when I became a student at J. J. McGilvra’s Elementary School. Marbles were the thing then, and I played with the other boys around the big tree behind the original school. Marbles captivated both boys and girls who cheered for their favorite players. The girls had Storybook dolls, which were popular then. “Storybook dolls are tiny, from only 3 ½” to 7” in height. They were created by Nancy Ann Abbott and were first produced in painted bisque from 1936 to 1947, and from 1948 to the early 1960s in plastic. They were lavishly costumed in the best fabrics and trims.” — (Dec. 2022, tribstar.com)

Our homeroom was where teachers checked our attendance and presented general information. We students had several of the same classes and became good friends, even doing homework together after school. That was my first real social experience exchanging thoughts and ideas. Once it was suggested we all drop our pencils at 2 p.m. sharp. Everyone laughed, including the teacher. Another time someone suggested a prank seen in an “Our Gang” cartoon.

It was really funny just hearing about it: Place a thumb tack on the teacher’s chair. The class was math located on the third floor, and the teacher was Miss Mehan, an elderly sort (of course, they all were then). The stage was set, the tack was upright, and we awaited, stifling any giggles. Teacher enters the room, sits, becomes upright and stage right leaves the room. What? Quick! Someone cue the laughter! No more than a minute later, Miss Mehan reenters the room with Mr. Chichester grasping (gasp) Mr. Paddle! First, we were given a seminar on personal safety. Enough? No. Girls were to clean the black board and erasers. Boys? Take the long walk from the third floor to the boiler room in the basement for an unforgettable swat. Afterwards, our group managed to maintain team spirit as we shared green rivers with six straws at Ken Lindley’s drug store (Medley).

There had been many changes to Madison Park during the war and the depression. In the early ’50s some cheap rentals were becoming available and were quickly filled by mostly young singles. Favorite hangouts were the Attic and the Red Onion (both making the top 10 in beer sales in the state).

Many social functions began to emerge like the Broadmoor golf events and the tennis club tournaments, which had limited access-members only. Skiing clubs planned trips allowing for a large gang of us in a Volkswagen van and always leaving room for the keg. Sometimes a bus was chartered to accommodate. The jet set club offered ski trips to remote areas via limousine and a private jet out of Boeing field.

On the bar scene, even though we were all acquaintances if not friends, there was a bit of competition over the women. It was not good form to horn in on one who had already made a move on a person. Of course, if she had that flirtatious nature, then you could say it was her fault, but on other occasions, it was even time to take it outside. Then one ran the danger of others attempting a linking. Ahh, neighborhood etiquette. Seemed that rules were not set in stone.

The single scene was thriving in the ’60s and ’70s, not only in Madison Park but downtown at the 410, the 610, El Gaucho and Henry’s Off Broadway to name a few. The guys who frequented these places knew each other from various scenarios and were a light-hearted group.

A friend introduced himself to a striking blonde in evening attire who was sitting at the bar at Henry’s. He bought her a drink and they toasted to a great chance meeting. She lit a cigarette and while staring into her eyes, he removed the cigarette and without breaking eye contact, smashed it out. She looked startled but there was little break in their conversation. Not exactly a smooth move, but it was his style. He made it known — he didn’t tolerate smoking.

Another night at Henry’s Mr. Charmer was totally engulfed with a very tall, attractive lady at the bar who seemed to be creating a distance from him. She proceeded to retrieve a jeweled cigarette case from her stylish handbag. In a flash, he took a lighter from her hand and lit the cigarette. I noticed he looked my way realizing all the group was watching this turn of events. We could not hold the laughter. Amazingly, he got her phone number and laughed letting us know we were rude, to which we toasted him.

We continually refined our group and would often reserve the private room at Sundays restaurant on Queen Anne (now Metropolitan Market) for epicurean delights. In the summertime we would go berry picking at another friend’s strawberry farm and proceed to “over-fun” with barbequing and imbibing. Of course, all of these groups metamorphosed into the Gus Arno era.

Decades later, new groups met at Peters in the Park (now Starbucks) and Bings Bodacious Burgers, where there were very active bar crowds. In both places we met those of like minds for happy hours and good eats. Tully’s Coffee (Home Street Bank) was number one for different political groups to gather and debate in a quiet ambience of carpeted floors and soft music. Starbucks has tried to take on that vibe albeit is much louder. Madison Park Bakery has new owners, but Karen and Terry, who owned and managed it for 29 years, will surely be missed. We wish them good luck.

Madison Park as a neighborhood is unique in its ability to create a sense of belonging. We are thrilled to be a part of it. Happy New Year to all!